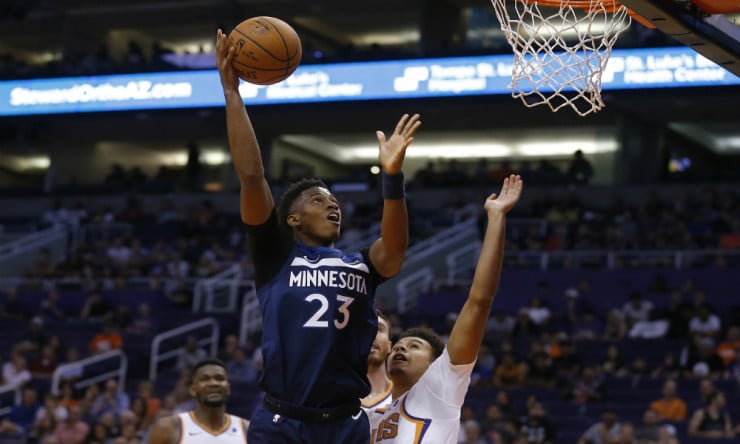 Being a number one overall draft pick in the NBA instantly puts a target on your back. Expectations come with that as well, fair or not. Andrew Wiggins has had a roller coaster ride since being taken with the top pick in the 2014 draft. After three years of promise, he has tapered off in each of the last two seasons. The make or break cliché is used too often, but this will definitely be a defining season for the Canadian.

Wiggins has played exactly 400 games in his NBA career. He has played all of them with the Timberwolves, who traded the face of their franchise to acquire the promising young talent. Wiggins has managed to stay healthy throughout his career. Through his first four seasons, he only missed one game. Last year he played 73 for Minnesota, who failed to reach the playoffs after a disastrous season that included trading Jimmy Butler.

Butler left a lot of money on the table to leave Minnesota – largely due to the lack of improvement from Wiggins.

For all of his physical tools and salivating upside, Wiggins has failed to significantly improve as a player. His scoring averages did improve in his first three seasons, going from 16.9 to 20.7 to 23.6 points per game. The following year it dipped to 17.7 and 18.1 per contest. His per-game averages in rebounds, assists, steals and blocks have all plateaued.

From the foul line, Wiggins shot 76 percent in each of his first three seasons, but dropped to 64.3 and 69.9 percent in the last two years. His shooting efficiency numbers across the board have been declining as well. The progression clearly has not been there, and you don’t even need the actual numbers to see it.

If you do need the numbers, they are not flattering. His 0.6 win shares last season ranked him 350th among 530 eligible players. Per 48 numbers were even worse as his 0.005 win shares were the third-worst in the league (minimum 2,000 minutes played). The Wolves finished 11th in the conference last season. Improving upon that will prove to be difficult given the stiff competition in the Western Conference.

The five-year, $147 million maximum extension that Wiggins signed two years ago was questionable at the time and appears even more detrimental now. Gersson Rosas is the new president of basketball operations in Minnesota, and it is not clear what his intentions with Wiggins are. Trading the former Rookie of the Year is one option, but it will not be an easy one. If he can show some true progression in his game, Wiggins could fit nicely alongside superstar Karl-Anthony Towns.

Under former coach Tom Thibodeau, the Wolves appeared to underutilize the services of Towns. He also tended to play his starters heavy minutes. Wiggins averaged nearly 37 minutes per game under his system. Those numbers came down dramatically towards the tail end of last season under new head coach Ryan Saunders. His career average still sits at 36 minutes per contest. The only other active players with a higher minute per game average are LeBron James, Kevin Durant and Damian Lillard.

During Media Day, Andrew said that he felt as though he was on the rise three years into his career, before “some changes were made” that seemed to derail his trajectory. Wiggins went on to talk about Thib’s coaching style, and how the yelling didn’t change anything for him. He stated that he prefers a player’s coach that is “real” with him, like Saunders, the youngest coach in the league.

With Saunders cemented in place, the Wolves could find new and better ways to get the most out of Towns and Wiggins. Using more screening action, it could allow smaller defenders to switch onto Karl, or get a bigger defender on Andrew, allowing him to drive to the basket. That could open up opportunities on the wing for their solid group of role players.

A healthy Robert Covington and Josh Okogie will provide Minnesota with hope from the outside, an area where they have struggled heavily. New additions such as Jake Layman, Jordan Bell and Noah Vonleh should fit right in as well. All eyes will be on rookie Jarrett Culver, whom the Wolves gave up assets (Dario Saric and the 11th pick) to acquire with the sixth pick in the draft.

Saunders will likely want to push the pace and score in transition this season. Minnesota was 14th in pace last season and had the 13th-ranked scoring offense. They have the players needed for that style of play and will now be able to play both small-ball and match up against bigger lineups.

Versatility will be a strength for them this season, but they must improve on their biggest weakness – defense.

The Wolves ranked 23rd in scoring defense last year, and 24th in overall defensive rating. Having Covington back will help in that area, but it needs to start with Towns and Wiggins. As leaders, both must show improvement on that end of the floor in order for the other guys to buy-in.

With a year of continuity and a more stable environment, Minnesota should still be an improved team from last season. Whether or not they are able to challenge for a playoff spot will likely be determined by the play of Wiggins. Andrew has the skillset to become a very good player, even if his ceiling is not as high as Karl’s. That being said, Andrew will turn 25 in February. The time is now for him to show improvement.

Aside from Jeff Teague’s 10 years of experience, only Covington and Gorgui Dieng have more experience than Wiggins. They each have just one more year than he does. So where exactly does he need to improve his game?

Shot selection and defense should be at the top of the list. Despite the decent scoring average, the more minutes he plays, the more shots he misses. In theory that makes sense, but there are a number of players (even his own teammates) that played more minutes and missed fewer shots. In all five seasons, Wiggins has ranked inside the top 20 in the league in missed field goals.

The defense is fairly straight forward. He has the ability to defend on the perimeter and even inside, but his desire and effort are not always there. Playing passing lanes more aggressively and being able to anticipate what comes next on a given play are two key areas to focus on.

Rebounding is another area that would really benefit the team if he is able to improve. His size and athleticism afford him great opportunities to crash the boards, especially when Towns is not on the floor. Obviously, everyone can improve their shooting, and while his three-point shot isn’t horrid, there is no excuse for him to shoot below 70 percent from the foul line. These are things that should have progressed much better entering your sixth year in the league.

Rosas has stated publicly that continuity and playing style under Saunders should make Wiggins one of the biggest beneficiaries this season.

For their sake and his own, here is to hoping he is right.