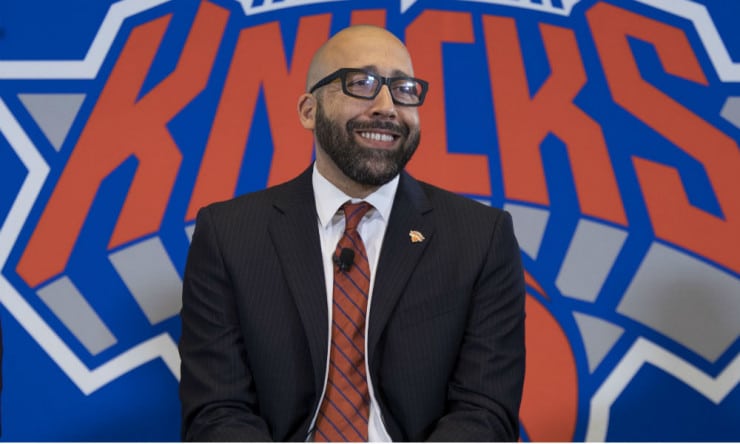 After they traded Kristaps Porzingis — who was the franchise’s biggest break in years — they bet the moon on winning both the lottery and free agency but came up well short. And that’s putting it lightly. They didn’t get the first overall pick (or if we’re being honest here, Zion), nor did they get Kevin Durant. They didn’t get Kyrie Irving. They didn’t even snag a free agent like Kemba Walker or Al Horford.

Usually, this would make for a pretty miserable offseason for Knicks fans, but misery is a feeling all too familiar for the basketball fans in the Big Apple. What’s worse, Durant added insult to injury when he said “it’s like the cool thing right now is not the Knicks.”

There’s not much need to elaborate on what’s gone wrong for the Knicks because that’s what the 21st century has been for them, mostly. Instead, let’s focus on what they’ve done in the wake of things not going exactly as imagined.

Earlier this year, this writer asked what New York’s back-up plan would be if that star-studded Plan A backfired. Early returns from their preseason say that they actually had one this time: Re-establishing the Knicks’ forgotten culture.

Newer fans don’t know it now, by and large, but back in the day, New York was always in the playoff conversation. During the ’90s, Pat Riley created a team that resembled the Bad Boy Pistons with well-known tough guys like Anthony Mason, Charles Oakley, Patrick Ewing and John Starks. They weren’t just a great team — they made a living as a collection of guys you didn’t want to mess with.

By adding the likes of Morris, Portis and Randle, the Knicks decided to bring back something that resembled that culture they once had over 20 years ago. They don’t have a player as talented as Patrick Ewing, an undeniable Hall of Famer, so they won’t be as good — but they’ll have a certain appeal that they haven’t had since those days and that’s in their assumed-to-be toughness.

That doesn’t sound like a lot, but it is something that could resemble a promising product. We even got a small taste of it a few days ago as Marcus Morris got into it with Justin Anderson during a meaningless preseason game. It was sudden. It was uncalled for. It was — in a way — inspirational. Best of all, it may have been a sample of what’s to come for New York: Actually Fun Basketball.

After the game, Morris stood up for both himself and for the Knicks on Twitter.

Never was a fan of doing what was cool! I love being a Knick!!! Feeling right at home

In some ways, Durant was right on: New York’s past mistakes over the last two decades have made the prospect of playing there not as exciting as it once was. And maybe the Knicks knew this better than anyone, so instead of spending big bucks unwisely or go diving for another high lottery pick, they’re trying to bring that zest of being a New York Knick back to square one.

This time, ideally, the Knicks won’t take shortcuts or hatch another get-rich-quick scheme that always seems to bubble up closer to the offseason. Now, it’s about building a winner at a slow and steady pace that’ll get them back to prominence, while also putting the many past failures behind them.

We’ve seen teams build a contender by proving that they have a successful product on their hands. Despite their long-time reputation as an anti-free agent destination, such team successes have lured in Al Horford, Gordon Hayward and Kemba Walker because they slowly built from the ground up. Brooklyn — who went through hell for the greater part of the 2010s, followed a similar path — and they got Kyrie Irving and Kevin Durant. The Clippers, even though they don’t have as fortunate a history as the Lakers, developed a winning culture that enticed Kawhi Leonard and Paul George.

Those teams didn’t build themselves instantaneously and they all started at a low point. They had growing pains. They paid their dues. The point is this: They had to start somewhere. The Knicks have tried to instantly build a great team — and, unsurprisingly, it’s led to some truly horrific times for them. With what they’ve brought on board, finally, they’ve begun to make the right moves.

That in mind, it might be time to take the glass-half-full approach when it comes to evaluating the transactions since Porzingis’ departure. Everyone knows what they gave up and what they missed out on, but that doesn’t mean there can’t be a positive spin from the Knicks’ point of view.

Porzingis was already an injury-prone player that had grown tired of New York and wasn’t going to commit to the franchise. By trading him when they did, the Knicks got some value out of him — and, better yet, they were able to rid themselves of previous mistakes such as Tim Hardaway Jr. and Courtney Lee.

Or, there’s Kyrie Irving, an eccentric player who not only worked his way out of two good situations — one of which he asked to be in — but was also the leader of one of the most disappointing teams in recent memory. His free agency team-up partner, Kevin Durant, just suffered one of the worst fates a basketball player — especially an all-timer like him — can go through by tearing his Achilles.

Although there’s no positive spin from losing out on Zion Williamson — that’s the nature of the lottery system, after all — the Knicks still own their best-looking youth movement since 2009. With the likes of RJ Barrett, Mitchell Robinson, Kevin Knox, Dennis Smith Jr., Alonzo Trier and Frank Ntilikina, the future is in better hands than usual.

As of now, they don’t have an established young centerpiece, but they do have something to build off of.

In an ideal world, the Knicks would love to have all four of Porzingis, Durant, Irving and Williamson, but that door is closed. As the idiom goes, however, when one door closes, another window opens. If the Knicks do re-establish the culture that once they prided themselves on, that could very well open a massively-sized window.

And the name of that window might just be Giannis Antetokounmpo.

That will be a story for another day — but for now, they’ve got the ingredients to get the Knicks back on the league-wide map and that’s all that matters.